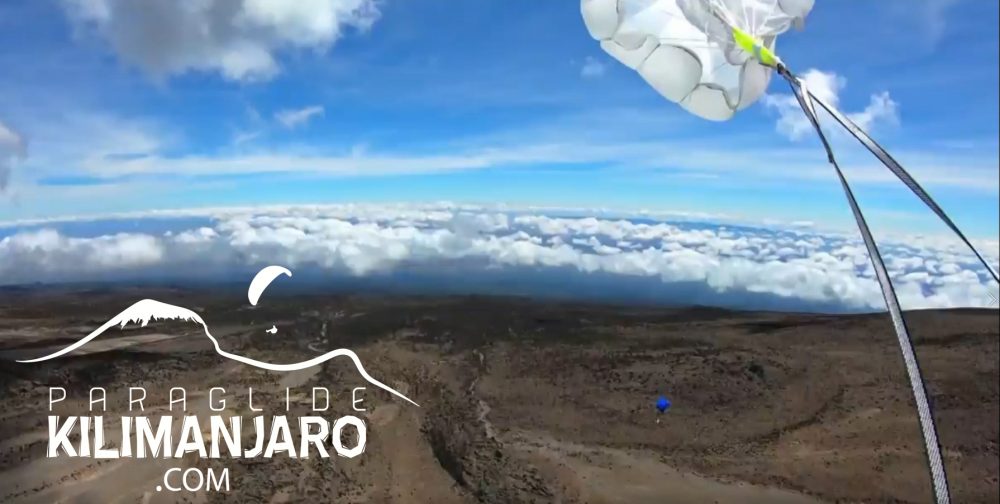 On 13 Sep 2018 paragliding pilot, Oliver Torlo, took flight from Kilimanjaro by paraglider. He launched around 5000m ASL along with another pilot, David Hillmann. Our expedition leader, Hendrik van Zyl (an experienced hike & fly pilot & PG instructor for many years), was busy kitting up when the mountain saw its first paragliding reserve deployment 30 min later! The pilot who threw the reserve, Oliver, landed in a river bed clear of rocks. Help arrived within 10 minutes and Oliver walked out of the park the same day with his guides. Despite the action this small party had a super time and really enjoyed their experience on Africa’s highest mountain. Needless to say, that once back in the hotel, our intrepid explorers nearly drank the bar dry in celebration! Well done again Hendrik, Oliver & David!

Effect of Altitude on Kilimanjaro - Reserve Deployment
To demonstrate the effect of altitude, have a look at the reserve deployment and take note of the faster than usual descend rate. As far as the reserve deployment went the pilot handled it well, it is never a bad idea to rather err on the side of caution and land safely under a reserve than to have a bad incident. Thank you Oliver Torlo for giving us permission to feature your video for educational purposes.
Footage by: Oliver Torlo & Hendrik van Zyl

For Launching a Paraglider Safely at Altitude
GET IT NOW